Here is the problem -- there is an open state (O) and closed state (C) and a stuck (inactivated) state (S). Transitions between these states happen like this 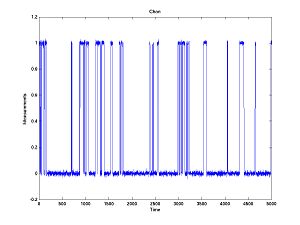 The transition probabilities for this plot are

There are nine parameters here, but there is a constraint that each block add to 1, so we only have 6 parameter to estimate. Moreover we might know that transition between open and stuck never happen, so there would only be 4 parameters to estimate.

We are going to compute the likelihood as we vary

Actually, the way I wrote the program it computes

The two are equivalent because P(Closed --> Open) is correctly known and the three "from Closed" probabilities add to 1.

And with two different seeds:

I was concerned about the first plot, until I plotted the next two. Then I realized that the algorithm tries to estimate the probabilities of relatively rare events based on a limited amount of data (5000 data points). The performance may not look great at first sight, but consider how subtle are the inferences that it is trying to make. The estimates are reasonably close ... at least within the ballpark. It would look better zoomed out. With a lot more data, one can expect the estimates to be much better.

The purpose of the lecture is to present the Bayesian filtering algorithm.

Step One: Start with Initial Probabilities for State And Make a Prediction for Next Time Step

For example, the predicted probability that you are in CLOSED after the first time step (but before more information is gathered) is

Same formula for the other states (OPEN AND STUCK).

You are computing P(data|state) for each value of state and the one data point.

Step Three: Weight the densities above by the prior probabilities of being in each state

Step Four: Sum the weighted densities over the state

Step Five: Compute the Posterior Probability Mass Function for State Given the Measurement

Repeat Steps One through Five until the data is exhausted

The boxes below are the program's output, broken up to allow for explanation.

The above is the initial Probability Mass Function for the State, specified as parameters in the code.

The inspector predicts probabilistically what will happen to the model. Because the initial state is open with certainty these values are transition probabilities from open. The non-zero P(Stuck ) is numerical error -- P(Stuck ) is not specified but rather calculated by subtracting the first two probabilities from 1. Floating point arithmetic is prone to such errors.

Now the program asks you for first data point. Let say we measure zero (what we would expect if the channel is Closed or Stuck). Type 0 and press return:

Only one of these is numerically non-zero. And that makes sense. We were sure that we were in the Open state, then the measurement told us we were no longer in the open state, so the closed state is the only place we can be.

All we have done is normalize to get a PMF. Now the probabilities add to 1, forgetting numerical artifacts. Here we are certain to be in the closed state.

Homework T.3: Compare the P(Data|Open), P(Data|Closed) and P(Data|Stuck) for a measurement of 0.5. Based on these values, does a measurement of 0.5 tell you anything about the State? Repeat data points of measurements of 0.5. What happens to the Posterior PMF. Does your answer depend upon the initial Prediction PMF (start entering measurements of 0.5 after a 1 (Open), then after 1 then a 0 (Closed), then after a lot of 0's (Stuck)). Why does probability mass concentrate on one state, regardless?

Homework T.4: Edit the code for BF_Inspector.m so that the INoiseLevel (the standard deviation of the measurement noise) is 1.0 (instead of 0.01). Redo Problem T.2. Note differences.