First of all thank you for completing the first survey. I have read and put a lot of thought into the responses. See the results here.

If you did not get my email (I did not have a complete list of addresses), click here. 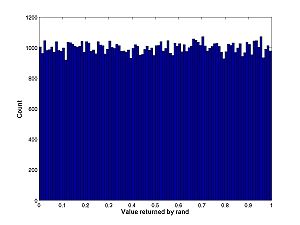 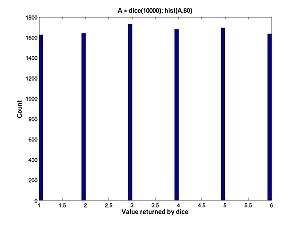 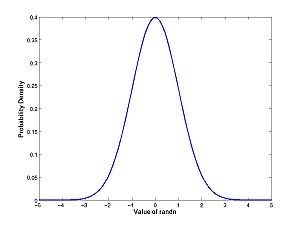 Some values returned by composing rand with a sigmoid function from last lab:

Note that values tend to either be close to 0 or close to 1 but not close to 0.5. You can see this property with the histogram: 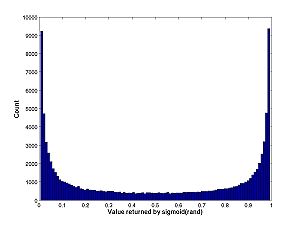 Homework from Lab B

Completed homework from Lab B is here.

People had difficulty with problem 5. Recall the instuctions:

Now let's try it with the sigmoid function. First plot it:

Many students did not execute the commands in order. If I had anticipated this I would have used different names (A and B) instead of just A. Your plots for problem 5 should have looked like this: 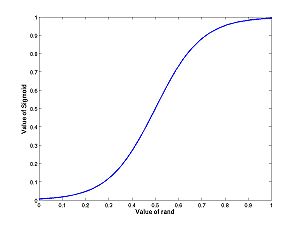 Problem 5 would have been very hard if the plots were not right.

Here is a sampling of students bonus problems.

See the difference? In the first case, the value of the first random variable tells you nothing about the value of the second. In the second case, if you measure the membrane potential at 12:00 noon to be -60 mV, you can be quite sure that ten microseconds later that the membrane potential is close to (but not necessarily exactly) -60 mV. The point is, if you didn't know the value at 12:00 noon, you would be much less certain about the second value.

What does this mean mathematically? The mathematical definition of independence is written in terms of certain densities. There are three types of densities for two random variables X1, X2.

The difference is best described with a picture. First generate some data:

This repeats the experiment 100000 times of calling randn twice. If you have access to the Statistics Toolbox (you don't on the machines in the classroom) you generate the plot below with this command:

This is what you would see: 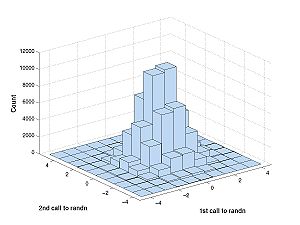 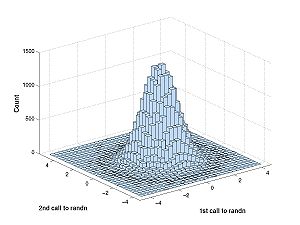 If you don't have the Statistics toolbox, download the free version, hist2d here. Now type

I think this will work, but if it does not, you need to put the downloaded file in a place where matlab will see it. To see what MATLAB's current directory is, type

then move the file to that directory. I do not think this will be necessary in the classroom (I tried it already), but if it is necessary, there may be problems with permissions to write to MATLAB's current directory. Get help from me if this is the case.

Let's try a histogram for the 10 microsecond experiment with the hogkin huxley model. First download HH1step.m, put it on your computer where MATLAB can see it (e.g. the current directory) then execute the following commands: V1 and V2 are the membrane potentials and N is the noise. 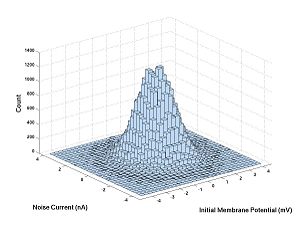 V1 Versus N is the same histogram as randn Versus randn. The only difference is that the axes are labeled. Here are the commands for this 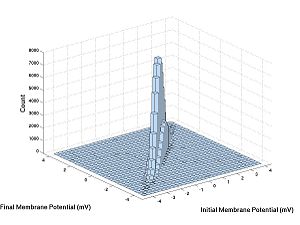 V1 and N are independent and V1 and V2 are not.

Mathematical Definition of Independence: Two continuous random variables X1 and X2 are independent if and only if their joint density is the product of their marginal densities: p(X1,X2) = p(X1)*p(X2)

Joint Densities for Many Random Variables

Before we move on let's look a little closer at our Hodgkin-Huxley model and test to see if it is working. You would not ordinarily be interested in just one time step (10 microseconds). Usually you would want the membrane potential on a long sequence of equally spaced times. We can iterate HH1step to draw this picture. Cut and paste the following sets of commands into MATLAB:

The symbol % tells MATLAB to ignore the rest of the line, so you can add a comment to a command. I is the injected current. Without specifying I, as above, the program sets I=0, but this doesn't make a nice voltage trace over 100 milliseconds because the squid axon is quiet without an injected current. Now we make a loop and plot: 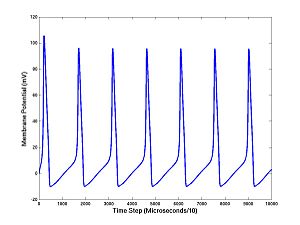 You should see a train of action potentials. The first command takes the first step, as before, but returns the ionic current activation variables (A) needed to continue the simulation. If you don't tell HH1step the values of A, it uses defaults; this is done on the first step. But if you continue the simulation you cannot continue to use the defaults: the components of A are changing quantities that, like the membrane potential, are needed for running the model and making predictions. The V's and the A's are the state variables. There are four state variables for the Hodgkin-Huxley equations (V and the three components of A). Notice what we have done with the noise: we add N*randn at each step. (Here is a technical point that is not too important: Inside the program I actually set the standard deviation of the added noise to be the noise level times the square root of the time step: N*randn*sqrt(10 microseconds), which is required for convergence as the time step (10 microseconds in this case) tends to zero.)

This is key: we have added noise at each step of the Hodgkin-Huxley simulation and arrived at a voltage trace. Thus each of the 10000 values of membrane potentials (at successive times separated by 10 microseconds) is a random variable. If the noise level N is large, this is more obivious. You can change I or N easily and rerun:

Now cut and paste the 5 commands above, ending with plot(1:10000,V), into MATLAB, several times, and see how the trajectory differs each time. 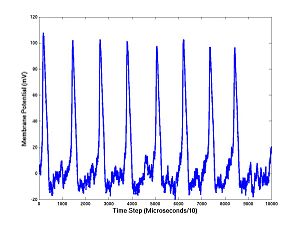 Each time you run the program you get V1,V2,...,V10000, a sequence of numbers. These will fall into bins of the 10000 dimensional histogram. The limiting fraction of times that the sequence falls into a small bin, divided by its 10000 dimensional volume, is the joint density, measuring how probable (i.e. probability density) the observed sequence is.

Another key point: If you change I and N, you get a different probability density. In other words, the probability density is a function of I and N. To express this fact it is written p(V1,V2,...,V10000|I,N) but this notation is an abuse of notation because I and N are not random variables.

Now repeat the 5 commands that run and plot the model. Now V1,V2,...,V10000 are fixed numbers (what you obtained from the calculation and plotted), but you think of I and N as variables. No more 10000 dimensions: there remain only two! p(N,I). This function is called the likelihood function. 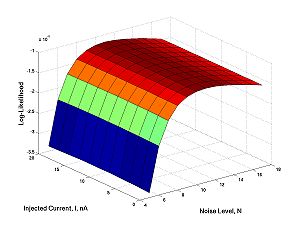 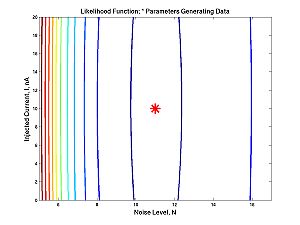 The peak this function is the maximum likelihood estimate of parameters.

There are somewhat subtle theorems that talk about the convergence of the estimates as the amount of data grows. Maximum likelihood estimation is one of the most well studied methods of parameter estimation in statistics.

Calculating likelihood for the Hodgkin-Huxley model both conceptually difficult and takes a long time (minutes) on a computer. Drawing graphs takes hours. Lets do it for randn (much faster).

Remember the commands for drawing a histogram

Compare this histogram with the theoretical density for the normal distribution:

It would be nice to have a function that returns the probability density. Type this into the editor and save as randnpdf.m:

Now you can calculate the probability density of any value of randn. Try this

Another thing you can do is get a data point, then see its density

Repeat these commands about 10 times (cut and paste or use the up arrow) to get some intuition about how much probability density points (i.e. calls to randn) tend to have and how much variation there is. Note that if the distribution changes (i.e. use rand instead of randn) this experiment can come out very differently. Specifically all points returned by rand have density 1: remember what the histogram looked like.

Because two calls to randn are independent, the joint density is the product of the marginal densities

But there is a problem if we try to do this with 100000 data points: the densities are small numbers, look what happens when we multiply 100000 small numbers together in MATLAB:

MATLAB cannot represent a number that small, so it gets turned into zero. No matter what the data are, the probability density calculated by MATLAB will be 0.

Solution: We can calculate the log of the joint density. When we calculate likelihood, we will want to compare two different sets of parameter values. Does one set produce more probability density (i.e. likelihood) or does the other? Recall: "A < B" if and only if "log(A) < log(B)", so we might as well just compare log-likelihoods because that is the only thing we can compute in MATLAB. Also recall: log(A*B) = log(A) + log(B). So here is the computation:

You will get a slightly different number depending on the seed of randn.

Likelihood for randn as a function of Mean and Standard Deviation

Repeat this command several times. You should get values close to (within several standard deviations from) the mean 10.

Let's create a function. Open the editor and type in the following:

Save the file as randnms.m and try it out

Now we want the PDF of randnms. This will be another function; in the editor, and cut and paste the following

Now compare the log-likelihood at the true parameters versus the assumed parameter (and remember that the two were very close). With the data from my random number seed, I get:

The first set of commands set the true parameters, the range of the assumed parameters, and the size of the sample. You can change these numbers and rerun if you want.

These statements generate the data and calculate the log-likelihood at each set of parameter values in the range. You can rerun these commands to see if the likelihood function depends on the sample drawn.

These figures plot the likelihood function as a surface and as a contour. For the figures below I have changed the line widths and marker sizes to project better. These commands are not shown. 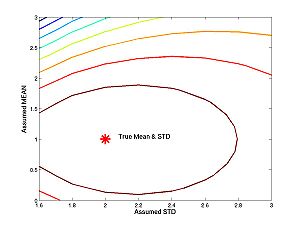 The problem of finding the maximum likelihood estimates of the parameters gets harder and harder the more parameters you do not know. So sometimes when you think you know a parameter pretty well you just assume you know it and it drops out of the likelihood function. The problem is sometimes you get it wrong. This is a big issue for neural models. You are forced to make certain assumptions about the model, but how sensitive are your results on the precise validity of your assumptions? The following three homework problem explores these issues. 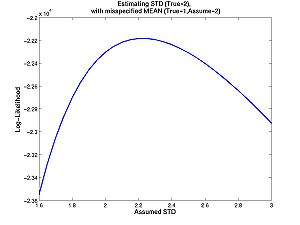 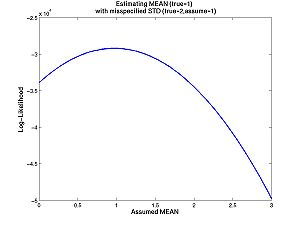 I replaced the command

Then I spent considerable time tweaking the ranges (of the assumed means and stds) to get the plot to look reasonable. Just look at the results below: 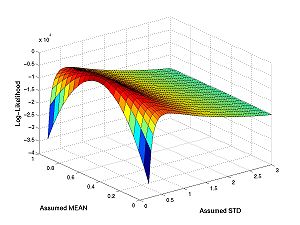 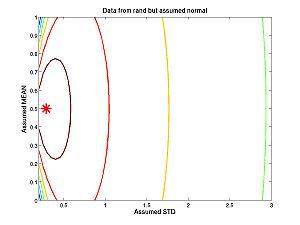 Click image for full size contour plot. Added later: The asterisk is the true (std, mean); the peak of the function is the estimate of (std, mean)

If you finish lab early, you might want to look at the textbook software, which should be on the lab computers now. Next Thursday's lab will use this software. If it does not work, tell me.

Here is the present plan:

Thursday, Jan 5: Introduction to Neuron's in a Action, textbook.

Beyond: More textbook tutorials, and eventually a lab that discussion Bayesian filtering, how likelihood is calculated for the Hodgkin-Huxley model.